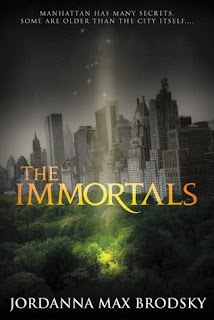 I know last week I said I was thinking of giving up on Zero Day - I didn't though, I sped read my way through it and finished it last night. After that I started focusing on:

This book was chosen for the same reason as Zero Day as a potential selection for my post for the January Calendar Girls challenge - it's a debut novel from this year. So far - and I am only 72 pages in at the moment - I am enjoying it MUCH more than I did Zero Day. It's one of my favourite fantasy sub-genres, modern takes on classical mythology, in this case Greek/Roman mythology which is one of my favourite types within the sub-genre. This novel is more like Rick Riordan's Trials of Apollo than it is his Percy Jackson/Heroes of Olympus in that it's from a god/goddess's POV. The main character is Artemis (here called Selene) and just like in Riordan's books the setting is New York City. Which should be obvious from Central Park featuring on the cover and the fact that the tagline says Manhattan.

"MANHATTAN HAS MANY SECRETS.

SOME ARE OLDER THAN THE CITY ITSELF.
Manhattan.
The city sleeps. Selene DiSilva walks her dog along the banks of the Hudson. She is alone-just the way she likes it. She doesn't believe in friends, and she doesn't speak to her family. Most of them are simply too dangerous.
Murders.
In the predawn calm, Selene finds the body of a young woman washed ashore, gruesomely mutilated and wreathed in laurel. Her ancient rage returns. And so does the memory of a promise she made long ago. To protect the innocent-and to punish those who stand in her way.
Gods.
With the NYPD out of its depth, Selene vows to hunt the killer on her own. But when classics professor Theo Schultz decodes the ancient myth behind the crime, the solitary Huntress finds herself working with a man who's her opposite in every way. Together, they face a long-forgotten cult that lies behind a string of murders, and they'll need help from the one source Selene distrusts most of all: the city's other Immortals.
Much like Lev Grossman's The Magicians spoke to a generation of adults who grew up with Harry Potter, THE IMMORTALS will enchant anyone who loved American Gods or Percy Jackson." -- via Goodreads

Can't say that I'm crazy about the Grossman comparison - I hated the first Magicians book so much I had to stop reading it. The premise was intriguing and perfect and exactly something I would like, the characters were so over the top pretentious I couldn't stand it and they still make me angry 2 years later.

Now why am I only up to page 70? Because Friday night I forgot to bring the book up to bed with me and didn't feel like trekking down two storeys to get it from the basement so I started re-reading Kelley Armstrong's Omens on the Kobo app on my phone. So in between responses to Angie on Saturday and Sunday I devoured Omens finishing it sometime yesterday evening. I immediately wanted more, which always happens when I start reading Kelley Armstrong, I can never just stop at one book. Therefore I immediately started the second book in the series which I'm reading now to the neglect of my poor library copy of The Immortals. 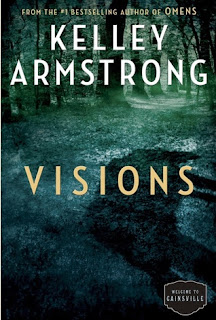 I had read Omens before but I never got around to reading the rest of the series which I now know will be on book 5(!) next year. That means I get to read 3 in a row for the first time so I am very excited. The Kobo edition I am reading on my phone does not appear to have page numbers and I can't judge the percentage either (it's not displayed) so I can't say for certain how far into it I am yet. But it's very exciting so far and pretty unputdownable. I love Kelley Armstrong's writing, I have yet to read a book by her that I haven't enjoyed and so far this one is not proving any different.

This series is another fantasy sub-genre, the paranormal romance one this time as with most of Kelley Armstrong's stuff. It's more like Age of Legends so far in that it leans more towards the paranormal fantasy side with the romance playing an important but not completely central role. There's also some mythological fantasy sprinkled into this paranormal fantasy in the form of Welsh mythology. I've had to bookmark a Welsh to English dictionary website!

"In the second book in bestselling author Kelley Armstrong's exciting new Cainsville series, Olivia's newly discovered power to read omens leads to the discovery of a gruesome crime with troubling connections to her hometown.

Omens, the first installment in Kelley Armstrong's Cainsville series, introduced Olivia Taylor-Jones, daughter of notorious serial killers, and Gabriel Walsh, the self-serving, morally ambiguous lawyer who became her unlikely ally. Together, they chased down a devious killer and partially cleared her parents of their horrifying crimes.
Their success, however, is short lived. While Olivia takes refuge in the old, secluded town of Cainsville, Gabriel's past mistakes come to light, creating a rift between them just when she needs his help the most.
Olivia finds a dead woman in her car, dressed to look like her, but the body vanishes before anyone else sees it. Olivia's certain it's another omen, a sign of impending danger. But then she learns that a troubled young woman with a connection to Cainsville went missing just days earlier--the same woman Olivia found dead in her car. Someone has gone to great lengths to kill and leave this young woman as a warning. But why? And what role has Olivia's new home played in this disturbing murder?
Olivia's effort to uncover the truth places her in the crosshairs of old and powerful forces, forces that have their own agenda, and closely guarded secrets they don't want revealed." -- via Goodreads

THIS WEEK’S RANDOM QUESTION: Do you tend to find that you make more time to read during the holiday season? Or do you have less time to read because of the hustle of the season?


I make time to read at all points of the year because reading is my jam. It is easier to make time to read even more during the holidays however because then I can do like I do on a standard weekend and just spend an entire day getting through a book. Aside from visiting family on Christmas day there's not much in the way of hustle and bustle in my holiday season and I always take at least one book along on those visits for reading in the car and later in the evening after things have quieted down. I remember one time when we stayed over at my aunt's house and I stayed up until 3am because I wanted to finish the book I was reading. No regret was had that day even though I was utterly exhausted the next morning.

Posted by Lauren Bourdages at 02:43