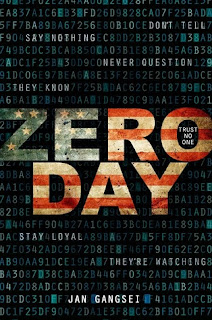 I requested this one from the local library last week after signing up for Flavia and Melanie's Calendar Girls challenge. They announced that the first challenge was going to be to pick your favourite debut novel from 2016. It was at that point, when I looked back on everything that I've read so far this year, that I realised that I hadn't actually read ANY debut novels. I feel like that's unusual for me. Either way though it meant I needed to hunt down and read at least 2 debut novels before January 4th.

Zero Day is one of two that I requested from the local public library. I started reading it first because at the time (until the next day when I brought home 3 Agatha Christie novels from work) my mum had decided that she liked and was going to read the second book I got (Jordana Max Brodsky's The Immortals). I picked Zero Day based solely on the teaser which really hooked my interest:

"Eight years ago, Addie Webster was the victim of the most notorious kidnapping of the decade. Addie vanished—and her high-profile parents were forced to move on.

Mark Webster is now president of the United States, fighting to keep the Oval Office after a tumultuous first term. Then, the unthinkable happens: the president’s daughter resurfaces. Addie is brought back into her family’s fold…but who is this sixteen-year-old girl with a quiet, burning intelligence now living in the White House? There are those in the administration who find her timely return suspicious.
When a national security advisor approaches Darrow Fergusson, Addie’s childhood best friend and the son of the president’s chief of staff, he doesn’t know what to think. How could the girl he’s missed for all these years be a threat to the United States? Still, at the risk of having his own secrets exposed, Darrow agrees to spy on Addie.
He soon realizes that his old friend is much more than the traumatized victim of a political fringe group. Addie has come with a mission…but will she choose to complete it?" -- via Goodreads


That makes this book sound like, to me anyway, a cross between The Manchurian Candidate, a really good episode of Law & Order SVU, and that cheesy Taylor Launter movie Abduction (which I will admit to enjoying the one and only time I watched it) all rolled into one. I was excited about it. Until I actually started reading it. I am up to page 58, which puts me at 16% through it according to Goodreads, and at this point I am seriously considering quitting it. It's just not well written. There's a lot of showing instead of telling and literally every single thing that has happened so far feels more contrived than, well I can't think of a good comparison because it's really contrived! And so forced. So yeah I think I'm just going to stop. I started The Immortals this morning hoping against hope it would be better and even though I am onl 3 chapters into it as opposed to 10 like with Zero Day I am already much more invested and engaged with The Immortals.

THIS WEEK’S RANDOM QUESTION: Does reading help you to release stress during stressful times? Do you have a favorite book that you return to for calm?


This question takes me back. I remember at least mentioning/hinting at this in previous Musing Monday posts but I'll explain myself completely this time. This has kind of always been one of my traits, and I am well aware of its existence in my character. When I am stressed, any kind of stress, all I want to ever do is read a book. This was hard when I was in undergrad because as an English major I was always assigned to read specific novels, that's something I've never enjoyed. I want to be able to read whatever I am in the mood for reading at a given time, not being told what to read and when. So I'd get stressed from having to read all these books I didn't enjoy and I'd want nothing more than to pick up a book for fun and pleasure. Whenever I tried to do this however my body would practically seize up with guilt. I hated feeling guilty about reading the things I wanted to read. The guilt never actually stopped me caving in anyway, just ensured that I would have to deal with it after if I was lucky enough not to be caught out. I've since gotten a lot better about feeling guilty. But I definitely haven't stopped reading as a stress reducer/coping mechanism.

I do have certain books that I'll go back to over and over again, the Harry Potter series is the big one for that. The Lion, The Witch and The Wardrobe is another because it's soothing. Outlander is one I often go back to, but only the part AFTER Claire is sent back in time, because I find the part with Frank boring. Mostly though I just try and read whatever it is I'm in the mood to read. Because different types of stress seem to put me in the mood for different genres or different authors or even different formats (graphic novel vs. novel). So as long as I listen to those cravings whatever I read manages to calm me down.

Posted by Lauren Bourdages at 03:13