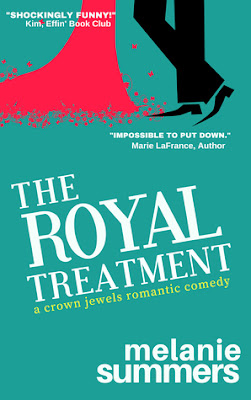 For fans of Bridget Jones and The Princess Diaries comes a laugh-out-loud, feel-good comedy with a sizzling side of romance…

Ultra-private, ridiculously handsome Crown Prince Arthur has always gotten by on his charm. But that won’t be enough now that the Royal Family is about to be ousted from power once and for all. When Prince Arthur has to rely on the one woman in the kingdom who hates him most, he must learn that earning the love of a nation means first risking his heart.

Twenty-eight-year-old Tessa Sharpe, a.k.a. The Royal Watchdog, hates everything about Prince Arthur. As far as she’s concerned, he’s an arrogant, lazy leech on the kingdom of Avonia. When he shocks the nation by giving her the keys to the castle, Tessa has no choice but to accept and move in for two months. It’s lust at first sight, but there’s no way she can give in to her feelings—not if she wants to have a career or a shred of pride left when her time at the palace ends…

Can two natural enemies find their forever in each other’s arms, or will they ruin each other to save themselves? -- via Goodreads

Let me start my review by telling you the story of how I came to this book because it really set my expectations for how I read the book. Angie won the book in late 2017 and read it in January 2018. I commented that it sounded like something I'd want to read and that I'd have to borrow her e-reader the next time I visited her. She informed me that she'd won an autographed physical copy and then sent it to me in the mail and it sat on my bookshelf ever since. For her birthday this year, I wanted to buy her the second and third books in the series as paperbacks to match her first book. And then I thought to myself, "Ooooh I wonder if I reach out to the author if I could buy some signed bookplates off of her so I can really get Angie a matched set." So with that in mind, I hunted down the email address for Melanie Summers, who is a Canadian author, and I emailed her and told her the whole story. I certainly was not expecting the response that I received or especially the speed with which she responded. Melanie is absolutely lovely, and based on this interaction she is now one of my favourite authors. Within two hours of receiving my email, she emailed me back to tell me that she loved my idea so much that she was going to send Angie personalised autographed copies of both books 2 and 3 on my behalf. So I was obviously stupidly excited about that. I told Angie that her birthday gift might be delayed because I know what Canada Post can be like about shipping to England, but it arrived early, and when Angie opened it she was absolutely over the moon.

Now, backstory out of the way, let's get to my actual review of the book. My expectations going into it were high based on the fact that Angie loved it and that I had such a positive experience with the author. I wanted to love it, but I was also a bit nervous because it's described as a romantic comedy and I am VERY much hit or miss with romantic comedies. I really don't like most of them I find a lot of romantic comedies too awkward and as an awkward and anxious person watch or reading about people in long, drawn out, awkward situations sets off my own anxiety. But I really enjoyed the book. Sure, there was some awkwardness, that just goes with the territory for a romantic comedy, the awkwardness tends to be where the comedy comes from. However, what made this book make the list of romantic comedies I enjoy, is that not ALL of the comedy came from awkward moments, and the awkward moments were far enough between and not so drawn out that they made me uncomfortable. Summers does a very good job of tempering awkward humour with witty humour and has a fantastic mix of sweetness that runs throughout all of it.

Tessa is, for the most part, an incredibly relatable and realistic character. It's incredibly easy to sympathise with her and to put yourself into her shoes. She's supposed to be the average, everywoman character who the reader can imagine themselves as. But she's unique enough, intelligent enough, and independent enough to really stand out and stand up on her own. Being the only daughter in a family of highly intelligent and highly dickish brothers (one of whom is an astrophysics professor, and I'm only mildly disappointed she just didn't make the obvious rocket scientist joke) who treat her like crap it shouldn't come as a surprise that the author has also given her a crap history with men. But for all that Tessa is strong-willed, she knows what she wants, and barring disastrous accidents is for the most part pretty good about making it happen on her own for most of the book. She's a woman who has been beaten down by men her whole life and so she doesn't trust them, and this is especially true of Prince Arthur.

Prince Arthur, I'm so glad to bring him up. I love him as a character. He is a case study in subversions in a lot of ways. As is his relationship with Tessa really. To me, he really seems to almost take on the feminine role in the relationship with Tessa. Usually, in this genre you see the girl trying to change herself for the guy, trying to get him to fall for her etc. But here, it's Arthur doing those things and I love that Summers has subverted the gender expectations that way. It makes me incredibly happy, that of the two main characters. Arthur is the one to fall in love first and the one to acknowledge his feelings. Now don't get me wrong he still really stands in the masculine role as well. He starts off as a cocky womaniser, but those are learned behaviours that he got from his awful father and you watch him grow out of them as he grows closer to Tessa.

The plot wasn't anything revolutionary. Your standard romantic comedy set-up of two seemingly incompatible people meeting under unusual circumstances, hijinx ensue, love happens. What makes this book stand out is the characters and the specific hijinx. You've got a disgraced journalist cum political shock blogger (pun VERY much intended for those of you who have read/will read this book) who finds herself living in the palace with the very family that she advocates against on her blog. You've got a prince who is trying to get some good PR because he's scared the country is about to oust his family. You see what's going to happen from a mile away, but you enjoy every moment of getting there with Tessa and Arthur. Overall, I really did enjoy the book, and I'll definitely be finishing the series.

If you watched Julia Stiles's The Prince and Me film, and enjoyed it, then I think you'll really like this book because it's in the same vein.

Posted by Lauren Bourdages at 22:29 2 comments: