This is me setting out on an epic journey 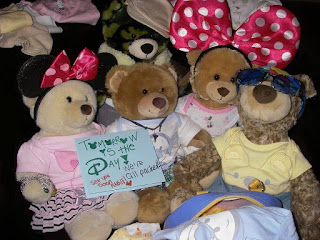 So I am writing this on the eve of travelling over to Canada to meet up with my fellow blogger, Miss Lauren.  She has already introduced herself so I won't go on too much but what she says is absolutely true in that we are best friends and have been for many years now.   We have lots of common interests such as Disney, Harry Potter, books, The Sims, in fact there isn't much we disagree on but there are some things  (No I will never ever get into Star Trek unless it is Enterprise)

So we are off on our long-planned, thought-we-would-never-get-there, special-birthday trip to Disneyworld, Florida.  You would not believe how excited I am about this, I am 40 years old and a HUGE Disney fan since I was a child but I have never been to any of the Disney theme parks until now.  I have seen pictures on the internet, watched videos on YouTube, liked posts on Facebook and listened to colleagues talk about their trips but finally, I am going myself.

I still don't think I will believe I am going until I see the castle, that iconic Cinderella castle, with my own eyes.  And although to some people, this isn't anything out of the ordinary, to me this is going to be the most amazing day of my life.

We have a few days yet before we get to Disneyworld, as I said I'm flying into Canada to meet up with lauren and her mom and then we are travelling down by car to Florida so we actually don't hit Disney until Friday but the whole trip is going to be so amazing.  I'm going to have to photograph and video every minute of it because I still won't believe I've been for real.

So this is me, signing off as I head off.  I heard Disneyworld have a health and safety issue.  Have you seen the size of the mice there? ;)

This post is sponsored by the letter "B" as in besties, blogs, & books

Two of my absolute favourite things in life are my best friend Angie, and books. Angie and I love doing stuff together, doesn't even usually matter what we're doing so long as it's together either virtually or physically, more often than not it's virtually because for the time being I'm in Canada and she's in the UK. At this point we've been best friends for literally half of my life, which I thoroughly get a kick out of saying, because at this point I really can't imagine my life without her in it. People always ask me how we met since she's always lived in the UK and I've always lived in Canada and I tell them that we met online, and I say it without any reservations whatsoever, but it's still a surprisingly foreign concept to a lot of people I talk to. We talk everyday almost without fail, the only exceptions being when we literally do not have access to a computer. We've each visited each other at home, I've been over there, I want to say four times now, and she will correct me if I've counted wrong and I welcome that, and she'll be coming to visit me for the second time in just a week from now and we're both so excited. So that's some background information about my bestie, now let's give you some background on my love of books...

Books are my other favourite thing, I love to read, always have always will, right at the moment my current fixation is paranormal fantasies, but really you throw any type of genre fiction at  me and I will be more than happy to give it a try. I have more books at home than I do book shelves but that doesn't stop me from buying more, though I try to stick to only buying books now that are part of a
series I am already reading or by an author that I love, I don't always succeed there though. So given how much I love books it probably wouldn't surprise you to hear me say I work in a library, but my love of books is not the reason I work at a library though it certainly factored in to why I thought I would be a good fit in libraries when I chose the industry. The way I channel my love of books, aside from chatting about books with my coworkers and patrons, is that I [attempt to] blog about books and reading. I say attempt to because I've never been very good at keeping up a solo blog. I can manage to post regularly for awhile and then life happens or I just get bored or what have you and then after that it's near next to impossible to get back in the groove. My most recent attempt was also probably my most successful, but even then I haven't posted since sometime in mid 2015, it is/was a blog called Novel Concepts. Which brings me to the final thing I wanted to talk about in this post, blogs...

Angie will admit that she has the same problem I do with solo blogging. So we were chatting the other day and she suggested the idea of a joint blog between herself and me, and well, since you're presumably reading this entry, you'll see that I thought it was a fantastic idea because now it exists. Two Birds One Blog is going to be our joint blogging venture and I am super excited about it. The original idea for a joint venture between us came up in 2014 during my last visit to see her in the UK; we had discussed maybe doing a joint Vlog channel on YouTube similar to Hank and John Green's vlogbrothers, but it never came to fruition mostly because of my camera shyness and the problems I have had with learning how to use video editing software. But writing is something both she and I enjoy, so I am looking forward to working on this blog with her. What will we post about on here? Basically whatever inspires us/whatever we want to. With me you can probably expect a lot of stuff on books, libraries, movies, and the like. We're both on a weight loss journey so you can probably expect to see content related to that floating about. Really it'll just be whatever we want in the moment and I am thrilled about that.

We both hope that whoever you are and wherever you are that you'll enjoy the things we have to say, and if you don't that's okay to, just be respectful about it!

Posted by Lauren Bourdages at 00:21 No comments: