Musing Mondays is a weekly meme that asks you to choose one of the following prompts to answer: 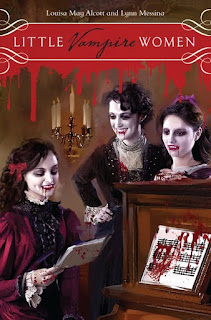 I decided that the only way to really make a dent in my TBR shelves this year is to have a cycle - read 1 more recently purchased book, read 1-2 graphic novels, read 1 book that's been sitting on the TBR shelf for more than a year and then rinse and repeat. So on Saturday I finished Betrayals (and seriously I feel utterly betrayed by the ending. Seriously the ending of that novel can go die in a fire I am that disappointed in the direction Kelley Armstrong is going, but I digress) and then read volumes 2 and 3 of Akira before trying to decide which book I wanted to read next. Little Vampire Women caught my eye so I grabbed it. I picked this up for $2 at a local independent bookstore probably 3 years ago or so now, long enough that I can't exactly remember when I bought it. I am NOT a fan of classic literature at all really, especially not stuff written in the 1800s. Which is funny because I have a degree in literature and a good 85% of my classes focused on the classics, which is why I am 100% certain I am not a fan. Anyway, I've tried the original Little Women several times and I've never enjoyed it and never gotten very far into it. I have however always wanted to try reading one of the new genre mashups of the classics - the trend which started with Pride and Prejudice and Zombies.

So I started reading Little Vampire Women before bed on Saturday night and I wasn't convinced that I was going to like it - until I got to page 10 where Messina talks about the Marches father being away at war  - the civil war. She then goes on to describe the civil war being about exactly the same thing that it's about in Abraham Lincoln Vampire Hunter, which I LOVED. I immediately in my head placed this novel in the same universe as ALVH and that is the frame of reference I am reading it now with now, imagining it as though it's actually just a side story of ALVH showing what life is like for those not fighting in the Civil War. It's making it really enjoyable for me, much more than I ever thought it would be anyway, but I am only up to the beginning of chapter 4 so we will see if that lasts!

"'Christmas won't be Christmas without any corpses.'
The dear, sweet March sisters are back, and Marmee has told them to be good little women. Good little vampire women, that is. That's right: Meg, Jo, Beth, and Amy have grown up since you last read their tale, and now they have (much) longer lives and (much) more ravenous appetites.
Marmee has taught them well, and so they live by an unprecedented moral code of abstinence ... from human blood. Meg, Jo, Beth, and Amy must learn to get along with one another, help make society a better place, and avoid the vampire hunters who pose a constant threat to their existence. Plus, Laurie is dying to become a part of the March family, at any cost. Some things never change.
This horrifying — and hilarious — retelling of a timeless American classic will leave readers craving the bloodthirsty drama on each and every page." -- via Goodreads

THIS WEEK’S RANDOM QUESTION: What do you think about books being made into movies or tv shows and do you always read the book first?

I have a shirt that has "the book was better" emblazoned across the chest. I used to wear it to work when I was a Page at the Public Library. In general that shirt sums up my feelings about book adaptations, but you know what they say about generalizations. There are always exceptions and my opinions on book adaptations are no different, there are times where my opinions on the matter are much more nuanced than my old tshirt suggests. The easiest way to sum it up then is that my thoughts on books being adapted to visual mediums largely depends on the book - and how well it's adapted. I think books have the potential to be adapted really well but I don't think they are a lot of the time. That being said there have also been some adaptations that I have actually found better than the source material, although not many. Take for example the Harry Potter films. Anyone who has read the books knows that there was a lot left out and a fair bit of that I personally found detrimental to the overall story but not to the quality or enjoyability of the films. You still get the full story of Harry from the film you just don't get as much detail as you do in the books and that's the trouble with film adaptations, because of run time requirements and other aspects of the medium, you lose out on the amount and level of detail that you get in the original book. TV adaptations can do better but they don't always; Game of Thrones is a really good example of that. I loved the books, and the TV show from what I've seen of it is good, but for my taste there's too much deviation/compressing of the source materials. You do gain in visualisations with both mediums obviously though, but I don't always consider that a good thing either because sometimes I prefer the look of things as I saw them in my own imagination.

My favourite thing about the prevalence of adaptations that is trending right now is that they do lead me to try books I've not heard of before and/or encourage me to finally read something that's been on my to-be-read list for years. Dirk Gently for example, I really want to watch the series but I haven't read the original books yet and I want to do that first. It's been my preference to try and read the books before watching the adaptations for years now for a couple of reasons, one of which again goes back to my love of Harry Potter. I made what is in my opinion now the mistake of not reading the books before the first film adaptation came out, I saw that first and then forever after no matter how JKR described any of the characters that appeared in that first film, I was unable to picture them in my imagination as anything but their actions. They became inextricably linked for me, which isn't a bad thing it's just not my preference and I made damn sure to read every other Harry Potter book well in advance of the other 7 films. A similar thing happened with Game of Thrones I tried watching the first episode of the show, realised I had no bloody clue what was going on, and then picked up the first book. After reading that I was unable to actually get into the show but I've watched it sporadically. Sometimes I don't find out that a film was an adaptation until after I've seen it and I always wish I'd known so I could have checked out the book first, but sometimes I do end up checking it out after.

What about you? Book first or movie/show first?

Posted by Lauren Bourdages at 02:34