Musing Mondays is a weekly meme that asks you to choose one of the following prompts to answer:

I’m super excited to tell you about...


The box of books I received today! So earlier this month on Facebook Kelley Armstrong (who I know I have mentioned is one of my favourite authors) announced that she had mystery boxes to give away. Each mystery box was going to contain a random selection of 9-11 of her excess books and they would all be autographed as well (for $40 all in). I thought what the heck and threw my name in thinking there is no way in heck I was going to be selected because there'd be hundreds of people wanting one. BUT I WAS! And they arrived today! And I only already owned 3 of them! Another 2 I own different versions of, 1 book I got I own as an ebook, and I got an auidobook which I already own a hardcover of. One of the 3 books that I already own was autographed and the other wasn't (oops?). So I figure I'll keep the autographed one and either sell/donate/gift my old copy. I was thinking about giving the other one to my Aunt who is the one who got me into Armstrong's Otherworld series, but that was when I discovered that that one wasn't autographed, but the 3rd one, also from that series is autographed so I'll give her that one. All in I got 10 novels and 1 audiobook and also some bookmarks. So which books did I get? 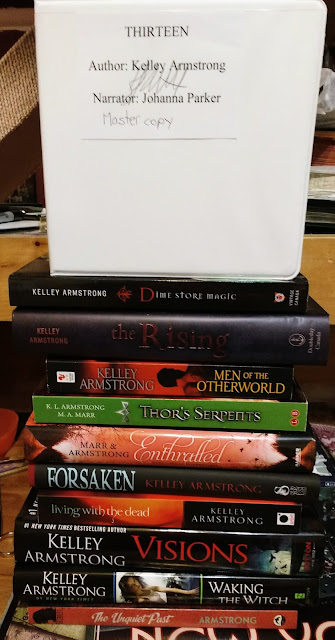 1. Thirteen - audiobook, this is the one I own a hardcover of. Book 13 of Women of the Otherworld.

2. Dime Store Magic - I already own this exact edition, and this is the one that isn't autographed :(. Book 3 of Women of the Otherworld.

3. The Rising - this one one I own and am going to switch out the non-autographed version for. Book 3 of Darkness Rising.

4. Men of the Otherworld - this is the one I am thinking about giving to my aunt. I own a copy of the edition that matches Dime Store Magic. Book 1 of Otherworld Stories.

5. Thor's Serpents - this one was on my Amazon wishlist cause I bought Loki's Wolves late in 2016 and it's still on my to be read pile. Book 3 in The Blackwell Pages.

6. Enthralled - I'd not heard of this one before! So this one is very exciting for me. It's part of the Morganville Vampire series apparently.

7. Forsaken - Another one that's been on my wishlist forever. Book 13.5 of Otherworld Stories.

8. Living with the dead - it's a good thing I am not one of those people who cares overmuchly about having all of my books in the same series match each other. Book 9 of Women of the Otherworld.

9. Visions - I just finished reading this at the tail end of 2016 haha. This is one I own as an ebook, because I bought the first book as an ebook and thus just kept going with that. It's nice to have a hardcopy, because I do love it. And it's autographed :). Book 2 in the Cainsville series.

10. Waking the Witch - I've had this one on my wishlist for ages because I want to read the entire series it is a part of. Book 11 of Women of the Otherworld.

11. The Unquiet Past - Another one I'd not heard of, most exciting! This one is the first in a series of 7 linked novels by 7 different authors called Secrets.

THIS WEEK’S RANDOM QUESTION: Are there any books you are really eagerly waiting for in 2017?

Hahahaha. Yes, yes there are. There are at least 10. Or these are the 10 that most immediately jump to mind anyway. I'm a series hound, so all of these books are part of ongoing series that I am enjoying and want more of. Here they are in order of release date:

So much for my plan of buying fewer books this year! Hah! What books are you looking forward to this year?

Posted by Lauren Bourdages at 22:56