I'm super excited to tell you about Parajunkee's #whyIreadromance challenge/event…


So the event actually started yesterday, but I am an idiot and thought the first post was supposed to go live today, so OOPS I'll just do days 1 and 2 together and cram them into one post. The event is in honour of Women's Friendship Day which was September 17, and there are 13 days worth of categories.


Which romance novel gave you the most/best 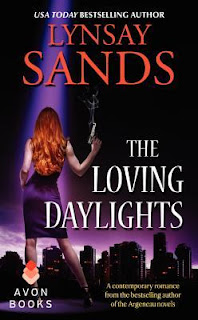 The Loving Daylights by Lynsay Sands

New York Times bestselling author Lynsay Sands delivers a "madcap escapade" (Publishers Weekly) in this contemporary romance about a quirky inventor and unexpected love.
Shy Jane Spyrus loves gadgets. She can build anything B.L.I.S.S. needs in the international organization's fight against crime—although its agents aren't exactly lining up at her door. Some of them think her inventions are a little too . . . well, innovative. Like her shrink-wrap prophylactic constraints or her spray-on truth serum.
Of course, you can't use wacky inventions to fix all your problems; Jane knows that better than anyone. Her neighbour has been kidnapped, driving that point home. She will have to team up with another human being—and Abel Andretti arrives just in time. He will help Jane find her neighbour, stop a villain, and, most of all, he will show Jane how to love the daylights out of something without batteries.

I spotted this on the 2 for $15 mass market shelves in Walmart, and what snagged my attention was the title, it's a very amusing play on the title of what happens to be my personal favourite James Bond film, The Living Daylights, well actually it's probably a toss-up between that one and Timothy Dalton's other one License to Kill, but either way Timothy Dalton is my favourite Bond...BUT I DIGRESS. So it was the title that caught my attention and the summary that totally drew me in. It's sort of like if you took Austin Powers but made it from Liz Hurley's character's POV and dumped that into a blender with Get Smart, Spy Kids (if the kids were adults), and the Ghostbusters reboot and then gave the resulting outline to a romance novelist. It's just a really, really fun adventure. If you've ever seen NCIS LA there's an episode where Deeks and Kensie have to pretend to suburbanites and they end up in their neighbours' basement "playroom", this is basically that scene in novel form and it's amazing. Let me give you a quote:

"Four of the men moved forward. They took away the gun Edie held, Abel's belt of vibrators, and Jane's bag and shoes. "Um, can I wear those?" Jane asked hopefully. She still had her laser bracelet and bomb earrings, but the shoes had six unspent darts in one heel and four in the other. They could come in handy." 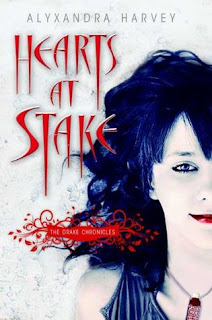 The Drake Chronicles by Alyxandra Harvey

Summary of Book #1 Hearts at Stake

On Solange’s sixteenth birthday, she is going to wake up dead. As if that’s not bad enough, she also has to outwit her seven overprotective older brothers, avoid the politics involved with being the only daughter born to an ancient vampire dynasty, and elude Kieran Black—agent of an anti-vampire league who is searching for his father’s killer and is intent on staking Solange and her entire family.
Luckily she has her own secret weapon—her human best friend Lucy—who is willing to defend Solange’s right to a normal life, whether she’s being smothered by her well-intentioned brothers or abducted by a power-hungry queen. Two unlikely alliances are formed in a race to save Solange’s eternal life—Lucy and Solange’s brother Nicholas, and Solange and Kieran Black—in a dual romance that is guaranteed to jump start any romance-lover’s heart.
Even fans of the genre who’ve seen it all will find a fresh read with kick-butt characters and family dynamics that ring true for all brothers and sisters—vampire or otherwise.


I couldn't choose just one book in this six book series, mainly because the primary source of swoon-worthiness is Nick and Lucy's relationship and they never get their own dedicated book. But that being said there is no shortage of scenes that cause you to swoon over all of the Drake brothers and Kieran Black. But then again I might be swooning wrong? I don't know if what makes other people swoon is what makes me swoon and vice versa. For that reason, this was a hard category for me to figure out a book for haha.

THIS WEEK’S RANDOM QUESTION: Do you like something playing in the background while reading?


Yes, I prefer to have ambient noise in the background while I am reading a physical book or an ebook. I don't have a preference either, it can be music or it can be a movie or TV show. If it's the former I've even been known to sing along when I am reading. However, if it's the latter it can only be something that I have seen dozens of times before and that I know won't pull me in away from my book. Not obviously, if I'm listening to an audiobook, of course I don't want any other background noise if I can at all avoid it.

Can you read in silence or do you need background noise?

Posted by Lauren Bourdages at 03:01