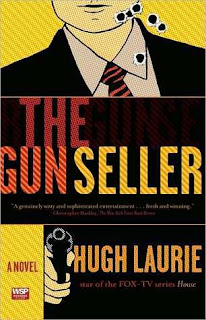 The Gun Seller
by Hugh Laurie

I am only 67% through Serpent's Kiss according to Goodreads. It just hasn't sucked me in as much as I'd like. The characters have done things to really tick me off actually. But I am enjoying it enough to keep going with it albeit at a much slower pace than I would usually read a 323-page book. So even though I am trying to finish the trilogy as fast as I can I think I'm going to take a break in between Serpent's Kiss and Winds of Salem. This reason is not least of them because the next book I want happens to be a library book from the public library and I've only got it on a 3-week loan with no guarantee of being able to renew it. And I suspect by the time I've finished Serpent's Kiss I'll have already had it checked out a week.

I heard about this book probably about 5 years back and I just remember being totally and completely psyched that the guy who played House and Wooster wrote a spy novel. I knew I had to read it at some point but I kept putting it off. I'd forget about it for long stretches and then something would remind me of it and I still wouldn't try to get it. Finally last week after being reminded of it again I said enough is enough and immediately put a hold on it from the local public library. Now that it's in my hands I can't wait to actually read it, especially after reading some of the review blurbs on the from cover. The book has been called "a skilful mix of Bertie Wooster and James Bond" (by Booklist), "the literary equivalent of Get Smart or cinema's Naked Gun." (by London's Weekend Saturday) a fun mash-up of Ian Fleming, Robert Ludlum and Douglas Adams-esque tropes (by Entertainment Weekly). With praise like that, I really can't wait to read it.


When Thomas Lang, a hired gunman with a soft heart, is contracted to assassinate an American industrialist, he opts instead to warn the intended victim – a good deed that doesn't go unpunished.

Within hours Lang is butting heads with a Buddha statue, matching wits with evil billionaires, and putting his life (among other things) in the hands of a bevy of femmes fatales, whilst trying to save a beautiful lady... and prevent an international bloodbath to boot. -- via Goodreads

THIS WEEK’S RANDOM QUESTION: Are there any songs that make you think of certain books or scenes from books? If so, which songs/books?


There are certainly many songs, like ACDC's Back in Black, Blue Oyster Cult's Don't Rear the Reaper, Thin Lizzy's Boys are Back in Town and Asia's Heat of the Moment that makes me think of all the books in the Supernatural novel series, but that's an easy answer really. If you've seen the show, you know Dean's taste in music and therefore it's impossible not to associate songs that Dean likes with books about Dean and Sam. It's so impossible that some of the authors have actually included the playlists they listened to while writing the books. There's a song from the Treasure Planet soundtrack, I'm Still Here (Jim's Theme) it doesn't make me think of a book so much as it does characters in a book - I can hear it playing when I think of young Harry and young Sirius from Harry Potter, or thinking of both Gale and Peeta from The Hunger Games. Which is because all of them share similarities with the character that the song is about. I'll never be able to hear Avril Lavinge's Sk8er Boi ever again without imagining a Ginny/Draco or Hermione/Draco fanfic. Miley Cyrus's He Could be the One definitely, makes me think of Tris and Four's relationship in Divergent. As much as I wish I wouldn't because I enjoy the song, Jesse McCartney's Just so you know sadly reminds me of Twilight. There are probably more but none are coming to mind right now.

Posted by Lauren Bourdages at 01:30