I bought the following book(s) in the past week… 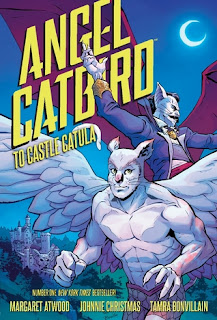 When I first heard about the first book, Angel Catbird, Volume 1 I had several reactions, confusion, curiosity and amusement chief among them. I was confused firstly because I had no idea why Margaret Atwood, who I've only ever known as a serious author was into comics let alone into writing comics. I now know, after reading volume 1 on Saturday, that she's a big comic fan. I am absolutely intrigued by that piece of knowledge!
I was also confused because what on earth is an Angel Catbird, haha, but that was also the source of my curiosity I had to know more! And that's also where the amusement kicked in. So it's been on my wishlist for ages, and when I was ordering something else off of Amazon and needed to make up the amount for free shipping I just threw volume one into the cart a few weeks ago.

Then as soon as I was finished with volume 1 I immediately ordered the second volume and added the 3rd to my wish list so I can buy it when it's released later this year. Here's the summary for volume 2:

What made volume 1 great to me was that it was total and complete nonsense and I have high hopes that volume 2 will be more of the same. I love utter nonsense in my fiction and comics :D. I also ordered another book last week. This one was mentioned in the ads at the back of Angel Catbird, Volume 1. 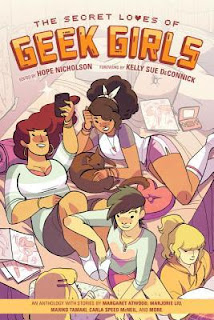 The Secret Loves of Geek Girls
by Hope Nicholson (ed.)

So why did I buy this one? Three reasons. Reason 1 I recognised the names of some authors names as authors I either like or have heard good things about. Margaret Atwood among them, there's also Marjorie Liu (whose Monstress series has been on my want to read list for eons it feels like), Noelle Stevenson (of Nimona and Lumberjanes fame) and Carla Speed McNeil (whose Finder Library I've had out from work for ages because I want to read it.). Reason 2 is because all the authors are females, and all of the comics count as stories - therefore I can use this to fulfil one of the challenges from one of my 2017 reading challenges to read a collection of stories by women. Reason 3 is really the easiest, I kind of love the subject matter, as a geek girl how could I not?

I'm really excited for this one to come now because I am super curious to see what it's all about. I'd never heard of it before I saw the preview at the back of Angel Catbird.


The Secret Loves of Geek Girls is a non-fiction anthology mixing prose, comics, and illustrated stories on the lives and loves of an amazing cast of female creators. Featuring work by Margaret Atwood (The Heart Goes Last), Mariko Tamaki (This One Summer), Trina Robbins (Wonder Woman), Marguerite Bennett (Marvel's A-Force), Noelle Stevenson (Nimona), Marjorie Liu (Monstress), Carla Speed McNeil (Finder), and over fifty more creators. It's a compilation of tales told from both sides of the tables: from the fans who love video games, comics, and sci-fi to those that work behind the scenes: creators and industry insiders.  -- via Goodreads

THIS WEEK’S RANDOM QUESTION: What’s the coolest name you have ever seen in a book? Would you name your offspring after said fictional character?


So as Angie will certainly attest from all of out many, many years roleplaying together - I am more than mildly obsessed with names. And I have a particular interest in unusual and even weird names, I've thrown a couple of doozies at her over the years only to have her completely turn them down. So instead of writing a giant long paragraph about why I love names and what kind of names I love I am just going to make a list of 25 of my favourite fictional names because I really think that's as few as I can narrow it down to:


As I do not plan on ever having children - no I would not ever name my offspring after any of these characters. But I would sure as hell use them as names for pets!

Posted by Lauren Bourdages at 04:24