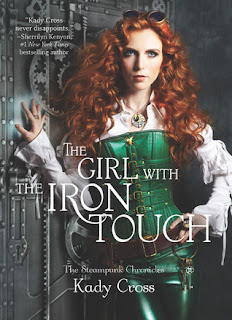 The Steampunk Chronicles by Kady Cross

This series has 4 full-length novels and 3 novellas. Cross published the first book The Girl in the Steel Corset in January 2011. I read that one for the first time in June 2011 and then had to wait for the next one to come out. By the time it did it was off my radar and then in May 2014 the final book, The Girl with the Windup Heart dropped and that made me remember this series. So I bought the entire rest of the series, I don't remember when or from where, but I did, and they'd been sitting on my TBR shelves ever since. Until last week when after finishing The Hammer of Thor I found myself very much in the mood to read some steampunk next. Which may or may not have been attributed to some discussions generated by last week's Musing Monday threads. But me being me, I am not one to ignore my reading whims, because I know ignoring my whims leads to reading slumps and I am on a pretty good roll right now (9 books ahead of schedule according to Goodreads.). I pulled all 4 Steampunk Chronicles novels off my shelf, set them on the top of the shelf closest to my desk, set aside the dust jacket for Girl in the Steel Corset and set about re-reading it so I could read my way through the rest of the series finally.

I remember really enjoying Girl in the Steel Corset the first time I read it and I remembered quite a bit about it going into the re-read which surprised me a bit give how long it's been since I read it and that it was sort of a one-off read at the time. The main character Finley Jayne is, according to the author, tied to the in-universe inspiration for the story of Dr Jekyll & Mr Hyde. I feel comfortable telling you that without giving anything away, but that's all I'm going to say about that because I don't want to give anything away! My enjoyment of this book was no less than it was during my first read, in fact, I think I may have even enjoyed it more this time around. It's a fun story and the characters are really great, all of them, which is nice. At the time of writing this, I am up to page 248 in the second book, The Girl in the Clockwork Collar (2012), which I am so far enjoying just as much as I did the first book.  In this book, the setting switches from London to New York as the gang from the first book travel there to help out a friend and end up hanging out with Nikola Tesla.

I expect that by the time I publish this post tomorrow I'll have started the 3rd book, which is the one I've pictured here, The Girl with the Iron Touch (2013). I'm super duper excited for that one because that's Emily on the cover and Emily is freaking awesome. If you plan to read the whole series do not read the summary below for Girl with the Iron Touch until you've read Girl with the Steel Corset because it will give too much away:


In 1897 London, something not quite human is about to awaken...

When mechanical genius Emily is kidnapped by rogue automatons, Finley Jayne and her fellow misfits fear the worst. What's left of their archenemy, The Machinist, hungers to be resurrected, and Emily must transplant his consciousness into one of his automatons—or forfeit her friends' lives.

With Griffin being mysteriously tormented by the Aether, Finley turns to Jack Dandy, but trusting the master criminal is as dangerous as controlling her dark side. Meanwhile, Sam is searching everywhere for Emily. He would walk into hell for her, but the choice she must make will test them more than they could imagine.

To save those she cares about, Emily must confront The Machinist's ultimate creation—an automaton more human than machine. And if she's to have any chance at triumphing, she must summon a strength even she doesn't know she has... -- via Goodreads


Monday update: Yup, finished Girl in the Clockwork Collar, starting Girl with the Iron Touch after I post this. Final thoughts on Girl with the Clockwork Collar? It was good! I enjoyed it as much as I enjoyed the first one and it was nice to get to know Jasper a little better than we did in the first book because he's a fun character. Also Tesla, what's not to love about Tesla?

THIS WEEK’S RANDOM QUESTION: If you could travel to one place you’ve read about in a book, what place would you visit and what book was it from?


That's like asking me to choose my favourite book! I can only pick one?! What an impossible task, but I guess if I have to just pick one I will. I mean the most obvious answer, given how much of a Potterhead I am, would be Diagon Alley, but do I want to choose the most obvious answer? Another few fairly obvious answers to anyone who knows me would be Narnia or Wonderland. But I'm kind of really tempted to choose something that is not one of those obvious three that I have so often fantasised about visiting. I wandered around looking at my bookshelves and considering my answer. I decided against Percy Jackson's world, Fionavar, anything dystopian, anything back in time, and a whole bunch of other options. One option that I thought about choosing was Garth Nix's Old Kingdom from the Abhorsen series, but as I was thinking about writing about that one the perfect answer popped into my head: the Enchanted Forest, care of Patricia C. Wrede's Enchanted Forest Chronicles. These books have been favourites of mine since I was in high school. I still remember the exact moment I discovered them. We were on a school trip to Stratford to see a play and I was browsing the theatre gift shop and came across a book called Talking to Dragons which looked so awesome. I bought it, and read it, and was very confused while I was reading it. This was the pre-Goodreads days, but my confusion led me to realise that I was actually reading the final book in the series first...oops? Once I got my hands on the first three I devoured them and I've since read them all probably about a half dozen times each.

The Enchanted Forest is to put it simply, amazing, it has everything. It's magical, filled with creatures and beings like witches (fire witches, and a witch who can talk to cats among them), talking dragons, Wizards who can be melted with soapy water, and a King with a Magic sword. It's surrounded by all sorts of interesting mountains and caverns too and would just be ripe for adventure and exploration. I definitely think it's a good choice.

What place would you choose?

Posted by Lauren Bourdages at 01:42