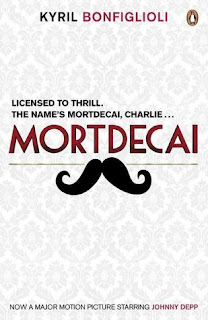 Mortdecai by Kyril Bonfiglioli - aka Don't Point That Thing At Me.

I was in search of short books from my TBR shelves last week to fulfil my self-inflicted challenge to read 7 books over reading week and picked this one up before deciding to switch to graphic novels. I made the switch because I can read graphic novels faster and I had an equal urge to read books and play as much Lego Marvel Avengers as possible last week, so faster was better because it meant more time for my game. How did I do on that challenge you ask? Well, I completed 9 books! The Girl with the Iron Touch, Rebecca's Daughters, volumes 3-6 of Scott Pilgrim, volumes 1 and 2 of Faith and The Girl with the Windup Heart. Now I'm setting about to finish Mortdecai and the other book I am currently reading Front Lines which I plan to discuss further in my March Calendar Girls post.

I first heard about this book via the 2015 Johnny Depp film Mortdecai. The movie was silly, fun silly, par for the course for Jonny Depp. I didn't realise it was an adaptation of a novel until last year when I saw the novel on the Book Outlet. It was cheap so I bought it. So far the novel itself is interesting, very different from the movie, though! I can't understand why they gave Johnny Depp such a deplorable moustache in the film instead of a fat suit because so far Mortdecai's weight has been very much a part of his character. Or better yet why didn't they cast heavier actors in both the Depp and McGregor roles? There are enough really funny heavier guys out there. Stephen Fry would have been hilarious as Mortdecai. Anyway, here's the summary:


Don't Point That Thing At Me by Kyril Bonfiglioli - Book 1 of the Mortdecai Trilogy, now a major motion picture starring Johnny Depp Introducing the Hon. Charlie Mortdecai, art dealer, aristocrat and assassin, in the first of the Mortdecai novels Portly art dealer and seasoned epicurean Charlie Mortdecai comes into possesion of a stolen Goya, the disappearance of which is causing a diplomatic ruction between Spain and its allies. Not that that matters to Charlie ... until compromising pictures of some British diplomats also come into his possession and start to muddy the waters. All he's trying to do is make a dishonest living, but various governments, secret organizations and an unbelievably nubile young German don't see it that way and pretty soon he's in great need of his thuggish manservant Jock to keep them all at bay ... and the Goya safe. First published in the 1970s, this hilarious novel is part Ian Fleming part P G Wodehouse. It is now a major motion picture starring Johnny Depp as Mortdecai, Ewan McGregor as Jock and Gwyneth Paltrow. 'A rare mixture of wit and imaginative unpleasantness' Julian Barnes 'You couldn't snuggle under the duvet with anything more disreputable and delightful' Stephen Fry 'The jokes are excellent, but the most horrible things keep happening... Funny and chilling' Sunday Telegraph Kyril Bonfiglioli was born on the south coast of England in 1928 of an English mother and Italo-Slovene father. After studying at Oxford and five years in the army, he took up a career as an art dealer, like his eccentric creation Charlie Mortdecai. He lived in Oxford, Lancashire, Ireland and Jersey, where he died in 1985. He wrote four Charlie Mortdecai novels, and a fifth historical Mortdecai novel (about a distinguished ancestor). -- via Goodreads


Boo, looks like my public libraries don't seem to have the rest of the series D: Oh well, that's what inter-library loans are for! :)

THIS WEEK’S RANDOM QUESTION: Have you ever accidentally destroyed a book? Such as accidentally dropped it in the tub, or run it over with a bike? How about accidentally on purpose or simply purposefully?


Yes, I have accidentally destroyed multiple books in my lifetime. The most ironic one was probably when I was a lifeguard and my lifeguard manual promptly drowned when I dropped it into the pool at an in-service training day. It was never the same again. I think it's still upstairs in my room all bendy and wobbly from drying funny. My copy of The Giver is similarly water damaged but I can no longer remember the incident or incidents that led to it getting in that condition. When I worked at the local public library as a Page I had to admit to my boss that she was going to have to charge me for a replacement fee because I stupidly left a library book sitting on the vanity in the bathroom and it was then knocked into the toilet...The most recent one though was not my fault it's totally 100% my dog Ria's fault - she ate one of my books from the current library I work at. It's one of those hardcovers with the cardboard spine and the spine it just an absolute mess now. I'm still holding onto it because I reaaaaaally don't want to pay the replacement fee yet.

The funniest destroyed book I've seen though was at work either in December of last year or January of this year, I think it was in January. Anyway, my co-worker Melanie and I digitise book chapters as part of our job. We have a scanner in our office but it was acting up and we had a lot to scan so we went out to use the public machines so we could both scan. I'm scanning away with my back to her and then all of a sudden all I hear from about 10 feet away is a really loud SNAP! She's pressed down on a book, and it promptly split right down the centre becoming a two volume item haha. Our Collections Maintenance Manager was able to fix it, but we still tease Melanie about hulking out on the books. What made it even funnier was that it was a book about respect - clearly we didn't respect it!

Posted by Lauren Bourdages at 00:10