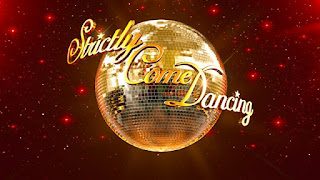 Strictly Come Dancing Week 4 began with not thirteen contestants but only twelve.  The start of this week saw Will Young pull out of the show due to ‘personal reasons’.  It’s a shame of course but the contestants must put their health first, although I do feel sorry for his partner Karen Clifton.  However, there was still to be an elimination this week so the remaining twelve couples are dancing for their place next week as usual.

My favourite from last week, Claudia Fragapane, didn’t have as good a week this week although it wasn’t a bad performance.  However Laura Whitmore recovered from being in the dance off last week and gave us a fabulous Quickstep.  I also enjoyed the performance by Greg Rutherford as well, his Salsa reminded me of a cross between Grease and Dirty Dancing.  Louise Redknapp was also graceful with her Foxtrot, Lesley Joseph danced a wonderful Charleston (and it was her 71st birthday on Friday) and there was another very strong performance from Danny Mac with his Quickstep. He is looking like a strong contender to take home the Glitterball trophy.


Now Danny Mac could have some competition on his hands from Ore Oduba.  He had an excellent score last week with his American Smooth routine to Singing in the Rain but this week he performed even better with his Jive and it showed in the reactions he got.  The audience was on its feet with their applause and the judges scored him 39, only one point off a perfect score with Darcey, Len and Bruno all giving him 10/10, the first tens of the series and it’s only Week 4.  I got tired just watching him dance, the guy has amazing energy.


However there were weak performances from Ed Balls, Naga Munchetty and Judge Rinder, plus Anastacia.  Her Rumba wasn’t anywhere near as good as Daisy Lowe’s, Daisy seemed much more graceful and much more together, whereas Anastacia seemed to just faff about.

So by the end of Saturday night, the leaderboard looked like this

Last week had the same bottom two at the leaderboard yet neither made the dance off, so who knows what tomorrow may bring.

So onto Sunday night for the voting results. I will confess I voted for Ore, I doubt he needed my one single vote after that performance but he got it nonetheless. I must admit I am loving the new track from Madness performed on the show tonight, Mr Apples. And so to the dance off and no surprise to see Naga and Pasha in there, but a big surprise to see Ed Balls going through to the next round and it’s Anastacia and Brendan in the bottom two (although amusing to see Anastacia’s reaction, did she think she was safe?) I much prefer Naga’s dance to Anastacia’s, but then again I’ve always liked the Charleston. However the judges chose to save Anastacia and Brendan, with all four judges voting for them.

And it’s farewell to Naga Munchetty.  I think she went out on a high though and enjoyed herself.  The remaining 11 contestants head through to week 5 and there is just one question: How will Ore Oduba improve on this week?  A score of 40 by any chance?