Musing Monday - The #ReadThemAllThon & sequels I have not read 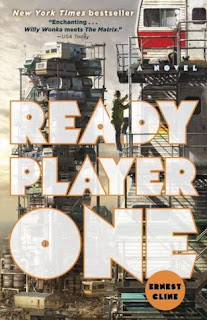 I've always wanted to do a read-a-thon, the idea of just reading as much as possible in a set period of time has always been appealing to me but until now I've never had the opportunity to participate in one before. So when I heard about the Pokémon themed #ReadThemAllThon there was really no question about whether or not I would participate. I've been a Pokémon fan since the Blue and Red versions were released in North America and I've played at least one game from every generation sign-up post.
since. The read-a-thon officially started yesterday, and you can find out more about it, and more about what I plan to read for it in my

The first thing I did when I woke up yesterday morning was to start my first book, I've started with Ready Player One in search of earning the Thunder Badge. In order to earn as many extra CP as possible in the challenge I will be posting reviews of each book on here as I finish them, which I am excited about because it gives me an excuse to debut the ratings graphics I created. As of this morning I am about half way through it, it's super engrossing! I got so into it this morning I was running late and had to play catch up to make sure I still left the house on time.

It's the year 2044, and the real world is an ugly place.
Like most of humanity, Wade Watts escapes his grim surroundings by spending his waking hours jacked into the OASIS, a sprawling virtual utopia that lets you be anything you want to be, a place where you can live and play and fall in love on any of ten thousand planets.
And like most of humanity, Wade dreams of being the one to discover the ultimate lottery ticket that lies concealed within this virtual world. For somewhere inside this giant networked playground, OASIS creator James Halliday has hidden a series of fiendish puzzles that will yield massive fortune — and remarkable power — to whoever can unlock them.
For years, millions have struggled fruitlessly to attain this prize, knowing only that Halliday's riddles are based in the pop culture he loved — that of the late twentieth century. And for years, millions have found in this quest another means of escape, retreating into happy, obsessive study of Halliday's icons. Like many of his contemporaries, Wade is as comfortable debating the finer points of John Hughes's oeuvre, playing Pac-Man, or reciting Devo lyrics as he is scrounging power to run his OASIS rig.
And then Wade stumbles upon the first puzzle.
Suddenly the whole world is watching, and thousands of competitors join the hunt — among them certain powerful players who are willing to commit very real murder to beat Wade to this prize. Now the only way for Wade to survive and preserve everything he knows is to win. But to do so, he may have to leave behind his oh-so-perfect virtual existence and face up to life — and love — in the real world he's always been so desperate to escape.
A world at stake.
A quest for the ultimate prize.
Are you ready?


THIS WEEK’S RANDOM QUESTION:  What sequel do you have yet to read?

Because of how big my TBR list/pile is (and it's forever expanding) there are a very large number of sequels that I have not yet read. They haven't been read yet for a variety of reasons but the most common two are either, I've had so long for the sequel to come out that I need to reread at least 1 previous book in the series to feel comfortable reading it; or I started reading it but something else grabbed my attention so I switched to that and then forgot to switch back.

So here's a short list of 5 sequels that I have not read, and the reasons that I haven't:

Plus the other 2 sequels in the Seven Realms series. I read the first book in the series, The Demon King back in 2009 when it first came out. By the time Exiled Queen was published the next year I had read so many other things either for pleasure or for school that I knew I'd need to reread Demon King before I could read it. Well the entire series has now been published and I still haven't gotten around to re-reading Demon King but Exiled Queen and the other two sequels are sitting on my shelf waiting for me.

2. Moon Over Soho by Ben Aaronovich

This is the second book in the 6 book Peter Grant/Rivers of London series. This series is one of many that has been described as Harry Potter for grown ups and so far the only one with that label that I actually agree with. In fact the first thing I said to Angie when I was reading Midnight Riot/Rivers of London back in 2013 after grabbing it in a flash sale at the Book Depository was that the main character, Peter Grant, made me feel like it was what would happen if Dean Thomas had grown up to become an Auror. As with the above series they're all sitting on my shelves waiting for me to continue reading them. I started Moon over Soho twice and got distracted away from it both times. Hopefully the 3rd time will be the charm and I won't get distracted.

3. Son of a Witch by Gregory Maguire

I want to read this book, but at the same time I don't you know that feeling? It's the second book in The Wicked Years, the sequel to Wicked which I slogged my way through back in either 2009, 2010 or 2011 (it was pre-Goodreads but I can't remember exactly when), and when I say slog, I mean it, it was a very slow read for me which is unusual. I wanted to like it but I just couldn't get into it enough to read it faster, which is sad because I really like the world of Oz and I was really excited about reading from the Witch's perspective. So because of how long Wicked too for me to get through I just never got around to reading the sequels even though we own numbers 2 and 3. Maybe one day I will.

4. The Magician King by Lev Grossman

Another series that I picked up because everyone calls it Harry Potter for grown ups. I am annoyed by the comparison though because by the end of the first book in the series The Magicians I wished I had never bothered picking it up. I wanted so very, VERY badly to fall in love with this book and series based on the comparison to Harry's world and because based on the summary it should have been everything I wanted and loved, it has elements from HP, Chronicles of Narnia, and Fionavar all of which I love dearly, but I ended up absolutely hating this book. The first half of the book was glorious and everything I hoped for and then it went sharply downhill because the characters were horrible, pretentious, and just frustrating beyond all baring.  So needless to say I will probably never read The Magician King and I am 100% okay with that.

You want to know why I haven't read this one? The 10th and final book in the wonderful and fun Night World series? Because it hasn't been published yet! The author has only been promising it since 1998. Now thankfully I haven't been waiting quite that long myself because I only discovered and read the first 9 Night World books in 2008 when they were re-realsed as 3 compilation volumes. But still, that was 8 years ago! Which means the book was supposed to come out 18 years ago, and yet it's still not even apparently on the horizon even though the author keeps promising. I have seriously given up hope at this point of ever having this series concluded and it's very sad, because I really did love the first 9 books. I used to regret that I hadn't discovered this series sooner, but now that I've been waiting 8 years for it to end, I'm really glad I've only been waiting 8 years instead of longer. :(

Posted by Lauren Bourdages at 16:39