Musing Mondays - I like big books and I cannot lie 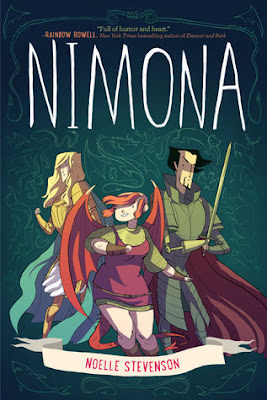 At the moment I am reading Nimona and I am about halfway through it after starting it just before bed last night. I'd heard of this book before in passing, never anything about it just that it was called Nimona and that it was a graphic novel and that one of the writers of Lumberjanes (another thing I've been meaning to check out) wrote it. I never actually thought about reading it, not until the Student Assistant in my office, Sophia, recommended it to me telling me that she thought I would like it because she had just finished reading our library's copy. I immediately went to grab it from the shelf, but it wasn't there, so I put a hold on it so our other Student Assistant would also be trying to find it for me. In the end it took about a week to find, we figured it must be missing, so I mentioned that to Sophia and she said she was SURE she'd seen it, so she went to where she'd seen it and it was there, it was just mishelved. It's been sitting on my shelf for the last few weeks waiting for me to get to it, and after reading In Odd We Trust this past Friday/Saturday I decided to have a graphic novel weekend and start reading it last night.

So far I am very, very much enjoying it and I fully expect to finish it if not tonight, then tomorrow morning before work for sure. It's fun, funny, colourful and cute. The synopsis from Goodreads does such a great job describing it:

The graphic novel debut from rising star Noelle Stevenson, based on her beloved and critically acclaimed web comic, which Slate awarded its Cartoonist Studio Prize, calling it "a deadpan epic."

Nemeses! Dragons! Science! Symbolism! All these and more await in this brilliantly subversive, sharply irreverent epic from Noelle Stevenson. Featuring an exclusive epilogue not seen in the web comic, along with bonus conceptual sketches and revised pages throughout, this gorgeous full-color graphic novel is perfect for the legions of fans of the web comic and is sure to win Noelle many new ones.

Nimona is an impulsive young shapeshifter with a knack for villainy. Lord Ballister Blackheart is a villain with a vendetta. As sidekick and supervillain, Nimona and Lord Blackheart are about to wreak some serious havoc. Their mission: prove to the kingdom that Sir Ambrosius Goldenloin and his buddies at the Institution of Law Enforcement and Heroics aren't the heroes everyone thinks they are.

But as small acts of mischief escalate into a vicious battle, Lord Blackheart realizes that Nimona's powers are as murky and mysterious as her past. And her unpredictable wild side might be more dangerous than he is willing to admit.

THIS WEEK’S RANDOM QUESTION: What’s your most favorite “chunky” book? (over 500 pages)

Several of my favourite books are "chunky" by this definition. I'm one of those book nerds who really cannot, at all, ever just pick one book. My number 1 favourite is a series, specifically the Harry Potter series and asking me to pick only one of those as a favourite gets you 5 minutes of waffling and an "I don't know I love them all, I can only pick one, probably Prisoner of Azkaban then if you're making me choose." reply. So to answer this question I turned to my "favourites" shelf on Goodreads and decided to pick 3 of those to list here as kind of a top 3. 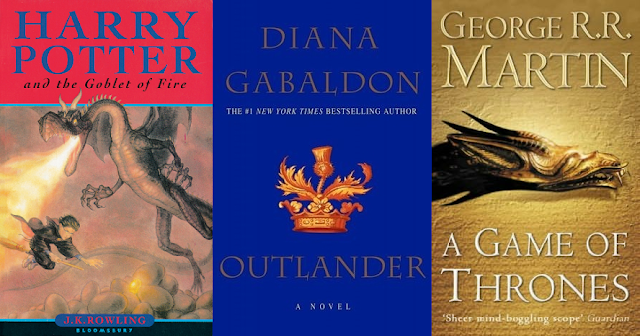 1. Harry Potter and the Goblet of Fire

The 4th installment of the Harry Potter series clocks in at 636 pages in the Bloomsbury edition, which is the edition that I own. It's probably actually a 3 way tie between GoF, PoA and DH as for which of Harry's adventures is actually my favourite. This one has so much going on and it's all so exciting, this was where things started to get really complex, but still before it started to get really dark. You forget that when you only watch the movie and don't reread the book very often, there's soooooo much more going on in the book. Now I want to reread it again.

So the first time I read this it was because I had to, that's right it was an assigned reading for a course in my undergraduate diploma. It was back in February of 2006, I remember that because I forced myself to read it over reading week. At 896 pages it's the longest of my 3 choices. In 2006 I was dead set against the romance genre, which, thanks to this book I now know was stupid, but at the time I had a different opinion. So being not at all interested in a romance novel I wasn't sure if I was going to enjoy this or not...but then I read the description, sword fighting, the highlands of Scotland, and fierce redheaded warriors it basically had everything I love in it, so I thought it wouldn't be too bad. Well it sucked me right in I absolutely freaking LOVED it. I have since reread it probably a good 12 times. But, I have never read any of the other books in the series, I tried reading the second one and I was just done as all get out after finding out who Jamie hooked himself up with after Claire had to go back to the 40s. People keep telling me I just have to push past that part, maybe I will try one day maybe I won't and I will just continue pretending this is a stand alone novel.

3. A Game of Thrones

I wish I had known about these books before they became an HBO series, but alas I did not. That being said I am thankful to the HBO series for introducing me to them because they are really, REALLY good books. I've never really gotten into watching the show, I read about the show regularly but I've never really watched it. I've read all of the books though, all of the very, very long books. The edition I have of this one is 807 pages. As a series opener it does a really good job of world building and stage setting, and of course being George R.R. Martin, you both meet and say good bye to a very large cast of characters throughout this one book. Definitely puts the epic in epic fantasy series,

Lauren
Posted by Lauren Bourdages at 20:16