I bought the following book(s) in the past week:

Today I had to go into Toronto for a doctor's appointment. On the way back home I wanted to stop into Yorkdale Mall and visit the Disney Store (I bought a blind box vinyl tsumtsum hoping for the Cheshire Cat and sadly got Marie instead, boo, clearly I need Angie to pick my blind boxes she manages to pick the ones I want.) and on the way back to the car I decided I wanted to go into Chapters, the big book store in the mall. I really should know better than to go into a book store when I have so many books I need to read already, but there was one book I really wanted and I can never resist having a browse. I buy books all the time online, but for exploration and finding something unexpected nothing beats the library or a bookstore. I could easily, easily have spent well over $100.00 and indeed I kept picking books up, waffling about them and putting them back down. In addition to the one book I actually planned on buying I picked up 2 more, and then even though I kept picking up more I forced myself to cute myself off at 3. In the end I ended up with a comic book, the first book in a science fiction series, and a YA alternate WWII history.

Valiant's most demanded hero steps out of harbinger and into an all-new adventure!
Orphaned at a young age, Faith Herbert - a psionically gifted "psiot" discovered by the Harbinger Foundation - has always aspired to greatness. But now this once ordinary teenager is taking control of her destiny and becoming the hard-hitting hero she's always known she can be - complete with a mild-mannered secret identity, unsuspecting colleagues, and a day job as a reporter that routinely throws into her harms way! Well, at least she thought it would When she's not typing up listicles about cat videos, Faith makes a secret transformation to patrol the night as the City of Angels' own leading superhero - the sky-soaring Zephyr! But flying solo is going to be tougher than she ever thought when Zephyr uncovers a deep-rooted alien conspiracy. Two-bit burglars and car thieves are one thing, but when the world needs a hero to stave off an full-blown extraterrestrial invasion, will Faith find herself in over her head or ready for her biggest challenge yet?

This is the book I knew I was going to buy because I have been jazzed about it for months since I first heard about it. Last Saturday I got an email from NetGalley about the books it was promoting ahead of SDCC and I saw that there was a partial galley of Faith available I promptly donwloaded it and read it and I was immediately hooked. Now that I have the entire book I shall devour it and then I will write a review here about it.

Humanity has colonized the solar system - Mars, the Moon, the Asteroid Belt and beyond - but the stars are still out of our reach.
Jim Holden is XO of an ice miner making runs from the rings of Saturn to the mining stations of the Belt. When he and his crew stumble upon a derelict ship, "The Scopuli," they find themselves in possession of a secret they never wanted. A secret that someone is willing to kill for - and kill on a scale unfathomable to Jim and his crew. War is brewing in the system unless he can find out who left the ship and why.
Detective Miller is looking for a girl. One girl in a system of billions, but her parents have money and money talks. When the trail leads him to "The Scopuli" and rebel sympathizer Holden, he realizes that this girl may be the key to everything.
Holden and Miller must thread the needle between the Earth government, the Outer Planet revolutionaries, and secretive corporations - and the odds are against them. But out in the Belt, the rules are different, and one small ship can change the fate of the universe.

I came across this book when I saw the latest book in the series on one of the "hot reads" tables, and the summary on that one sounded interesting so when I saw it was part of a series I decided to look at the series while browsing in the Sci-Fi/Fantasy section. The summary of this book sounded interesting but what really sealed its fate in coming home with me was two of the review blurbs on the cover, io9's claim that it's a "Hollywood blockbuster in book form" because I do enjoy me some Hollywood sci-fi blockbusters; and also the fact that George R.R. Martin had two blurbs recommending it, one on the front and one on the back. I figured if GRRM enjoyed it, and I enjoy his stuff, then I might possibly enjoy a book that he enjoys, so we'll find out if that supposition is true when I read it.

1942. World War II. The most terrible war in human history. Millions are dead; millions more are still to die. The Nazis rampage across Europe and eye far-off America.
The green, untested American army is going up against the greatest fighting force ever assembled—the armed forces of Nazi Germany.
But something has changed. A court decision makes females subject to the draft and eligible for service. So in this World War II, women and girls fight, too.
As the fate of the world hangs in the balance, three girls sign up to fight. Rio Richlin, Frangie Marr, and Rainy Schulterman are average girls, girls with dreams and aspirations, at the start of their lives, at the start of their loves. Each has her own reasons for volunteering. Not one expects to see actual combat. Not one expects to be on the front lines.
Rio, Frangie, and Rainy will play their parts in the war to defeat evil and save the human race. They will fear and they will rage; they will suffer and they will inflict suffering; they will hate and they will love. They will fight the greatest war the world has ever known.
New York Times bestselling author Michael Grant has created a masterful alternate history of World War II in Front Lines, the first volume in a groundbreaking series.

Saw this one as I was browsing the YA section. I walked by an endcap display unit labelled "Not just for Teens" and the title caught my eye and made me wonder what war it would be about. I didn't even notice the tagline or the lipstick at first so it was a complete surprise when I opened up the cover and read the blurb from the dust jacket. I love alternate histories so just everything about this got me really excited. So instead of finally picking up a copy of Rainbow Rowell's Carry On (which I still desperately want...) I decided to make this one my 3rd book; probably a good choice I explained it to my mum and she said she wants to read it when I'm done because it sounds appealing to her too.

THIS WEEK’S RANDOM QUESTION: Name a book that was turned into a movie, and completely desecrated (in your opinion).

I have, and used to wear often (especially when I was working as a Page at the public library) a shirt that reads "the book was better" which is in reality usually the way I feel about books that have been adapted into movies. That's not to say I don't enjoy movie adaptations, there are some, like the Harry Potter series that I thoroughly enjoy (not more than the books but I do enjoy them), the Hunger Games films are another good set of book-to-movie adaptations I enjoy. However I am supposed to be telling you about a book that was turned into my movie which in my opinion completely desecrated the book, so I will, but I wanted you to know I do tend to have strong feelings about book-to-movie adaptations. Specifically there are 2 that come to mind right away when I am asked this question. Those two are Eragon and The Lightning Thief (Percy Jackson and the Olympians #1)and their film adaptations. 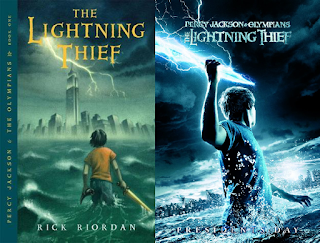 I love the Percy Jackson books after the Harry Potter books finished coming out it was a nice series to begin digging my way into and Rick Riordan is a really fun writer. I love his world. I've read all of his books. So when the film adaptation Percy Jackson & the Olympians: The Lightning Thief came out in 2010 right after I'd started reading the books I decided to watch it. I'd known that it was getting bad press for being a rather bad adaptation of the book but I watched it anyway. I definitely like a lot of other people (as evidenced by it's 49% Rotten Tomatoes score) had a few problems with it. My number 1 problem with it was the fact that the kids were all a good 4-5 years older than they were supposed to be in the book. That's supremely frustrating because them doing what they did at the age of about 12 was incredibly impressive. I also had a problem with the fact that they didn't even try to give Annabeth blonde hair. That being said I did like the casting of Logan Lerman as Percy, I just thought he was too old. They also cut some really great aspects, and really changed a lot of things (sometimes very important); this page does a really great job of outlining all the differences, and they are many. Overall though I wouldn't say it desecrated the book but it let's the book (and the book's fans in my opinion) down that's for sure. If you didn't read the book it's a good movie that can stand on its own as a fun popcorn flick, and I personally enjoy it as such instead of enjoying it as an adaptation of a book I like. 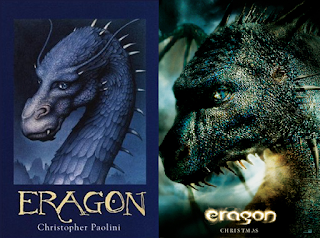 Eragon, oh Eragon. The book itself is not without its faults and flaws, it is not a perfect book but it is a good book and I did enjoy it once I got into it. And one day I will get off my butt and finish reading the series. One thing I will never, ever, do again though is watch Eragon the movie. Once was enough. It was just bad, painfully bad. I realised in the process of writing this that I threw away or donated the DVD at some point in the past because it was just so bad. The best part about the film was the CGI work on the dragons. I don't know how much stock a lot of people put into this, but it's only got a 16% on Rotten Tomatoes which to me is pretty telling and I really wish I'd known that before I'd decided to watch it. What's so sad is that it's got an absolutely fantastic cast, there's nothing at all wrong with any of the casting. But aside from good casting and good CGI there's not much else good about it. FanPop has a really good breakdown of all the differences so I'm not going to duplicate their work. This movie was definitely a butcher job in my opinion, so it's also not surprising that they decided not to make anymore films of the other books in the cycle.

Lauren
Posted by Lauren Bourdages at 23:53