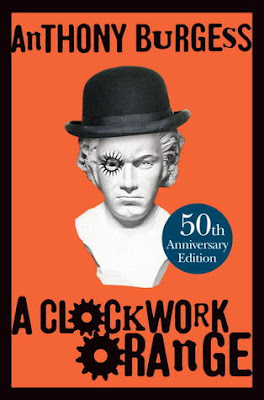 A vicious fifteen-year-old droog is the central character of this 1963 classic. In Anthony Burgess's nightmare vision of the future, where criminals take over after dark, the story is told by the central character, Alex, who talks in a brutal invented slang that brilliantly renders his and his friends' social pathology. A Clockwork Orange is a frightening fable about good and evil, and the meaning of human freedom. And when the state undertakes to reform Alex to "redeem" him, the novel asks, "At what cost?"

This edition includes the controversial last chapter not published in the first edition and Burgess's introduction "A Clockwork Orange Resucked." -- via Goodreads

This is not a book you read for pleasure.

This is not a book you "like" in the way you like Harry Potter or ice cream.

You don't "enjoy" it...but you do respect it for what it achieves as a piece of writing. It is a very well constructed piece of writing. Linguistically marvelous for sure. Burgess's NADSAT is up there with Tolkien's elvish in terms of language creation, which makes sense when you read that Burgess, like Tolkien, had a background in linguistics. The melange of Russian and British with NADSAT points to influence by Russia onto the British youth culture in the novel's dystopian alternate timeline. Even though it's not an influence that is ever explored, probably because our extremely unreliable narrator is a 15-year old boy who couldn't give a flying fuck about the influence of other countries on his own, it's an interesting thread for the reader to consider alongside everything else Burgess presents.

A Clockwork Orange is a disturbing book from the outset. From the very first sentence you know you're in for a brutal "what the fuck is Burgess thinking?" ride. There's such an extreme level of violence and depravity that the narrator engages in that Burgess coined his own NADSAT phrase for it, ultra-violence, which has seeped into popular culture to describe random acts of violence simply for the sake of violence. Because Alex is the narrator, the reader is treated to a first-hand journey into the depth of his depravity. He spares no expense describing what he does in lurid detail, I think the linguistic oddities of NADSAT are the only reason I could actually get through reading the book. If it had been written in plain English the level of description would have been far, far too much for my overactive imagination. It was hard enough with the NADSAT. It's not a take I've seen often in fiction, where an author fully immerses the reader in the mind of a deranged teenager and sends them down the rabbit hole of their darkness. I can think of only two other times I've experienced it. Stephen King's novella Apt Pupil and Christopher Pike's TheWicked Heart, both of which eerily enough involved Nazi influence on the narrators.

The next bit of this review is going to be a bit spoilery so I'm adding a jump cut...


Alex the narrator isn't the only thing disturbing about this novel though. After he's arrested midway through the novel we get to see exactly how messed up and dystopian his society actually is. To that point, we've seen the dystopia through the eyes and actions of an anarchical teenage boy bucking the system and society. Once Alex is arrested we get to bare witness to what is done by those who hold power in society. The way they treat criminals is appalling and systemic. What Alex ends up going through with his treatment is shocking torture. Violates basic human rights and dignity and actually tries to play god level of torture. That's one of the areas that Burgess is trying to explore in this novel, nature vs. nurture, and just because you can do something does that make it morally right? No, no it doesn't, as the Father ends up putting it, they didn't make Alex good, they took away his ability to choose between good and evil. Alex himself never says that he doesn't deserve punishment, but it's made abundantly clear that the level of retribution in this instance is so uneven that there's no way the reader can root for the government at this point of the story. This is a point that gets taken further after Alex is released and suffers massively under unchecked police brutality perpetuated by his former criminal colleagues who were given jobs as policemen. The acts taken by the state and the police are actually strangely prophetic given the rising levels of violence and violent rhetoric we see across the world in politics and policing currently. The book is similar to Atwood's The Handmaid's Tale in that regard, which I discussed in my review of that novel as well.

The end of the book, which you can only actually read in certain editions (because American publishers cut it for being too optimistic), is a complete tonal shift from the preceeding twenty chapters. It's almost got a mood-whiplash quality too it, but at the same time, Burgess has set us up for it because it's the only logical place to go. Burgess wanted to show that it is possible to change and to redeem onesself in adulthood. The American editors preferred showcasing the book as a display of unrepentant evil that will always be evil and will never change. The basis for the film version, was quite obviously, the edited American version.

If you can manage to stomach the brutal descriptions of violent acts there is a valuable lesson to take away from this horrifying tale.

Posted by Lauren Bourdages at 15:58