I haven't read as much historical fiction as I would like. Which isn't the same as saying I haven't read any historical fiction - I have, at least 33 novels since I started using Goodreads shelves properly. There are probably loads more that I haven't shelved properly. Either way that's not as many as I would like. My fantasy shelf, for example, has 272 books on it. Which for those of you math inclined means that my historical shelf is only 12% the size of my fantasy shelf. But all that being said I do have 4 contenders for this month's selection.

1. The Other Boleyn Girl by Philippa Gregory

It took me a long time to finally get around to this book and now I'm not even sure why it did. I've always been fascinated by Henry VIII and his wives, especially Anne Boleyn, but this and The Tudors both took me a long time to finally read and watch for some reason. I read it in 2012 and gave it 3 stars. It was really interesting. It's not about Anne, it's about her sister Mary and Mary's own relationship with Henry. It's a fascinating glimpse into what life in Henry's court might have been like for the B-List.

This one takes place in two historical time periods, 1945 and 1743 in the Scottish Highlands. There's time travel, but that's the only sci-fi element, everything else is purely historical fiction. You can tell that Diana Gabaldon spent a lot of time researching this novel, and all of that work really comes through. This one is about a  WWII nurse named Claire. She travels back to the time of the clans and meets a young clansman named Jamie Fraser. The first time I read this was in 2006 for an English class, as mentioned in an old post.

3. Paris to Die For by Maxine Kenneth

Inspired by an actual letter in the John F. Kennedy Library written by Jackie and revealing her job offer from the newly formed CIA this novel imagines what Jackie's life would have been like if she had accepted that job offer and become a CIA Operative. It's the first in a duology. It's set in 1951 with the main action taking place in Paris where Jackie interacts with real and imagined historical figures while she tries to help a Russian defect to the West.

I have talked about this one before in a couple of different posts, in fact, it was my pick back in March for best novel with a war in it. It's an alternate history set in WWII and based on the question "what if girls had been able to serve in the American Armed Forces?" It's full of BAMF young women, and I can't wait to get around to the sequel next year, Silver Stars is out now and sitting on my shelf but I don't have time for it until next year.

So which of those historical novels did I chose as the best one: 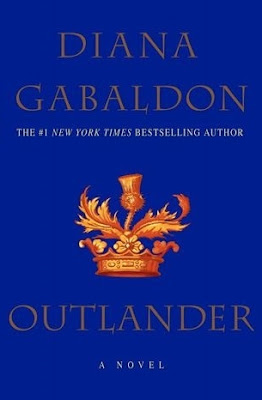 The year is 1945. Claire Randall, a former combat nurse, is just back from the war and reunited with her husband on a second honeymoon when she walks through a standing stone in one of the ancient circles that dot the British Isles. Suddenly she is a Sassenach—an “outlander”—in a Scotland torn by war and raiding border clans in the year of Our Lord...1743.

Hurled back in time by forces she cannot understand, Claire is catapulted into the intrigues of lairds and spies that may threaten her life, and shatter her heart. For here James Fraser, a gallant young Scots warrior, shows her a love so absolute that Claire becomes a woman torn between fidelity and desire—and between two vastly different men in two irreconcilable lives.
-- via Goodreads

I liked all 4 of them, hell I would even say I loved 3 of them (Other Boleyn Girl being the exception), but Outlander holds the best historical novel spot in my heart. I figure by now I've probably reread it almost as many times as I've read any of the Harry Potter books. So probably around 10-12 times. When I get the urge I just pick it up and start, often I don't start right at the beginning because the parts with Frank are almost unnecessary to me haha. It is the first book in a still ongoing series, however to me it will always be a stand alone novel. I feel like the way this one ended was fine, I didn't need to know more beyond how it ended. I certainly didn't need what she did in the second book in the series. I started reading it, something I hated happened and that was when I decided nope I am fine with Outlander as a stand alone book. And I've stuck to that, I've never picked up another James & Claire novel and I have absolutely no desire to. But I will always go back to this one.

As I mentioned above, it's incredibly well researched. I love everything about it. I've always had a certain fascination for Clan Wars era Scotland, and for redheads, so the main male character Jamie Fraser is just a perfect specimen in my eyes. Obviously, some of his behaviours, as a modern feminist woman, are things I would not put up with but they're appropriate to the context of the time and place so I would be daft to complain about them. Watching Jamie and Claire grow as individual characters and growing together is one of the best parts of the story.

But the overall best part of the story, to me anyway, has to be Claire, the heroine. She's got such a strong personality and identity and opinions. Claire recovers remarkably well from the time travel thing and then proceeds to marvel the reader with her resilience and adaptability. She doesn't just acclimatise to the past time period she unwillingly finds herself in, she embraces it and begins to grow and thrive very successfully. She does all of this without losing the things that make her the modern, progressive woman she was in 1945. Claire never loses her spunk. Physically she may be smaller and not as strong as Jamie, but throughout the novel, you can clearly see that they are equals and they treat each other as such, which is extremely refreshing.

Gabaldon does a fantastic job of getting you invested in the characters, but I really think her biggest strength is research. She uses all that research she did to really suck the reader into that era and help them fully experience that time and place properly.

Have you ever read the first book in a series and been like "Nope, this is good I can stop here and be happy with that resolution." after starting the second book? Do you think time travel automatically makes a book science fiction?

Posted by Lauren Bourdages at 18:14