I've always loved fairy tales. Growing up I had a lot of them memorised, I used to frequently read through my copy of Mother Goose. I also loved the Grimm Brothers fairytales. Fairy tales are just such a fun genre of story, I love how the old original ones were so much darker and grittier than the ones that children are reading today now when they read Grimm or Mother Goose. I feel like Disney really helped push that change when it started doing its animated retellings. Not that I have a single problem with that because the Disney versions are my favourite versions of those fairy tales. In undergrad, I took a class called Children's Literature and we spent quite a bit of time on fairy tales. It was really fun to have to read and analyse them for marks because it really didn't feel like work to me.

So which fairytale retelling did I chose then: 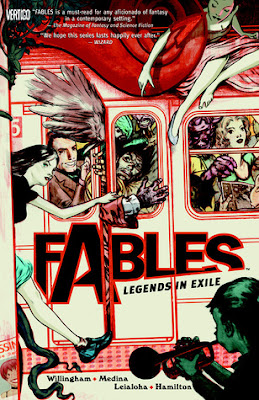 When a savage creature known only as the Adversary conquered the fabled lands of legends and fairy tales, all of the infamous inhabitants of folklore were forced into exile. Disguised among the normal citizens of modern-day New York, these magical characters have created their own peaceful and secret society within an exclusive luxury apartment building called Fabletown. But when Snow White's party-girl sister, Rose Red, is apparently murdered, it is up to Fabletown's sheriff, a reformed and pardoned Big Bad Wolf (Bigby Wolf), to determine if the killer is Bluebeard, Rose's ex-lover and notorious wife killer, or Jack, her current live-in boyfriend and former beanstalk-climber.

I was originally thinking about choosing Jackson Pearce's Sisters Red because I was really intrigued by her take on the seventh son of a seventh son trope. But then I realised that there are actually a few problematic things about that book and decided I couldn't justify calling it the best fairytale retelling, but it is an enjoyable one! Which got me thinking about which ones I had read and as I struggled to come up with which one I would call the best, I realised I was limiting myself to just novels, and then remembered how much I absolutely love Fables, which is a comic/graphic novel series.

In this series, it is very much a case of all myths are true. Hell, this is so much the case that Fables is the main image example of the trope over on TV Tropes. Literally, all the fairytale characters really do exist, and so do all of their original stories. It's a retelling because the characters have been forcibly removed from their own world and we now find them in our world trying to survive and thrive. Characters who never would have gotten the chance to interact in their original worlds are not all living together in New York City.

I've only read the first six volumes of the twenty-two volume run right now, but I have absolutely loved every volume that I have read. What really makes this retelling for me is the way that Willingham has stayed true to the original characters while throwing them into a completely alien situation and seeing how they react. I also really love how he takes characters we don't know very much about from their original tales and gives them amazing back stories and likes, Little Boy Blue is the one that really springs to mind.

The overall story of the whole series is that this Big Bad called the Adversary has taken over the fairytale lands and killed a whole lot of people. The characters we meet are the survivors who managed to get into our world. The adversary is still trying to get to them even in our world though. The smaller plots in each volume and how they interplay with this overarching plot of the entire series is superbly done, everything fits together like a puzzle. There's a throughline within each book that doesn't take away from the story within that volume. As you can see from the summary I posted for volume one, it's about Snow White, Rose Red, the Big Bad Wolf, Bluebeard and Jack. The second volume moves the story up to the secondary home of the characters, the farm in upstate New York where all the non-humanoid fairytale characters live. It too centres around Snow White and Rose Red. Volume three's central story is about Snow White and the Big Bad Wolf. In volume four we get introduced to Little Red Riding Hood. Volume five is a battle, and in volume six we finally learn more about the adversary and who it is is very unexpected!

The best way I can think to describe this is - Game of Thrones, Friends and Mother Goose have a love child.There's a lot going on, it can be a little hard to keep track of all the characters, but there's enough familiarity and humour so that you really don't mind the moments of confusion. And actually I just realised that a much better comparison is Once Upon a Time in comic book form...and now I really want to actually sit down and watch all of OUAT, I only ever made it through the first season and then got bits and pieces of the rest.

Is there such a thing as too many characters when you're mashing multiple stories together like Willingham does in Fables? What's your favourite classic fairytale? Have you read any of Fables?

Posted by Lauren Bourdages at 15:30