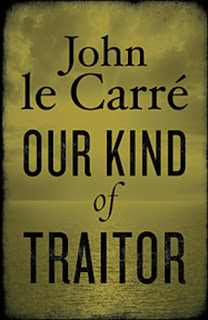 Our Kind of Traitor by John le Carré

My coworker Melanie and I went to see the movie adaptation of this over the summer, at first we didn't know it was a movie adaptation of a novel. The movie starred Ewan McGregor as Perry, Naomie Harris as Gail,  Stellan Skarsgård as Dima and Damian Lewis as Hector; 4 actors who I always get enjoyment from watching. We both really enjoyed the movie, which I personally wasn't expecting because I did not enjoy Tinker, Tailor, Soldier, Spy (another John le Carré adaptation) which seems blasphemous because I love Gary Oldman.


After seeing the movie I decided I would give the novel a try because I keep saying that I really enjoy spy novels and should read more of them. I borrowed a copy from the local public library, oh about 7 weeks ago? (I've renewed it twice) Ah, Goodreads says I started reading it on September 4, thank you Goodreads for knowing that. Usually I read *MUCH* faster, Angie will attest to how fast I can read I am sure. But this? Such a slow read for me. Not nearly as slow as Wicked, but slow enough for someone who read Deathly Hallows cover to cover in just under 9 hours.


What makes it so slow for me I think is that I honestly was not enjoying it, like I kept saying to my coworker Melanie that I was thinking about stopping because the movie was actually so much better in my opinion (which doesn't happen often I usually find the book to be better and even have a shirt that proclaims as much). I decided that I would follow the "give a book 100 pages minus your age" way of reading - I would give myself until page 70, and then if I still wasn't enjoying it I would stop reading it and call it a DNF. I got to page 70, decided it wasn't so bad and I really wanted to see just how different it was from the movie (because it deviated HUGELY) and now I'm up to page 222 and I'm actually enjoying it. I still preferred the movie and don't see that opinion changing.

Here's the summary of the book from Goodreads:

Two young lovers treat themselves to a once-in-a-lifetime holiday on the Caribbean island of Antigua. He's an austere tutor at Oxford. She's a sparky rising London barrister. Their native Britain is floundering in debt. On the second day of their holiday they encounter a rich, charismatic fifty-something Russian millionaire called Dima who owns a peninsula, wears a diamond encrusted Rolex watch, has a tattoo on the knuckle of his right thumb and wants a game of tennis. What else Dima wants is the engine that drives John le Carré’s majestic, thrilling, tragic, funny and utterly engrossing new novel of greed and corruption, from the arctic hells of the gulag archipelago to a billionaire’s yacht anchored off the Adriatic coast; to the Men’s Final of the French Open tennis championships at the Roland Garros stadium; to two murky Swiss bankers dubbed Peter and the Wolf; and finally and fatally to a Swiss alpine resort nestling in the shadow of the north face of the Eiger and the story’s terrifying end.


THIS WEEK’S RANDOM QUESTION: What is currently on your TBR pile?

Heh heh heh, you really want to open that can of worms? All right, don't say I didn't warn you. My 'Want to Read' shelf on Goodreads currently contains 1280 items. I will admit I don't remember a good 75% of those items -  a lot of them got added just for giveaways I entered and that shelf kind of becomes an "oooh that looks interesting let me shelve it so I remember it in the future" kind of shelf. But there is some over lap between it and my physical TBR pile.

Some of the inclusions on the Want to Read shelf that I really, really still want to get around to:

1. Watchmen by Alan Moore - the classic graphic novel that inspired the movie
2. The Gun Seller by Hugh Laurie - Yup, House wrote a novel and I want to read it
3. Jane Slayre: The Literary Classic with a Blood-Sucking Twist by Sherri Browning Erwin - I'm *really* not a fan of the classics, they usually bore me, but I think I could totally get behind Jane Eyre with vampires
4. Johannes Cabal the Necromancer (Johannes Cabal #1) by Jonathan L. Howard - I have a coworker who is obsessed with these and she's got me curious about them
5. Carry On by Rainbow Rowell - the complete novel of the fanfic from Rainbow Rowell's Fangirl which is very vaguely loosely an analogy for a Drarry fanfic. I have the audio book and as soon as I finish my HP audio books I plan to listen to it

I also have a few "to be read" lists on Amazon, they sort of function similarly to my want to read shelf on Goodreads (and there's A LOT of overlap between the two), more like a reminder than anything else, but there are a few things on there that I really, really want to read like:

1. Figment 2: Legacy of Imagination by Jim Zub - Figment is one of my absolute favourite things at Disney World so when I found out there are Figment I knew I had to have them
2. Angel Catbird by Margaret Atwood - it just sounds so super duper completely out there given everything I know about Margaret Atwood that I just have to read this
3. Strange Fate by L.J. Smith - ya know, if and when it ever bloody well comes out...
4. Son by Lois Lowry - the 4th and final book in the Giver quartet I have read the first 3, the first one *many* times so I need to read this one if only for closure
5. Incarceron by Catherine Fisher - I accidentally bought the second book in the series first so now I need to read this one so I can read it, oops

And last, but certainly not least, I present to you, my physical "to be read pile": 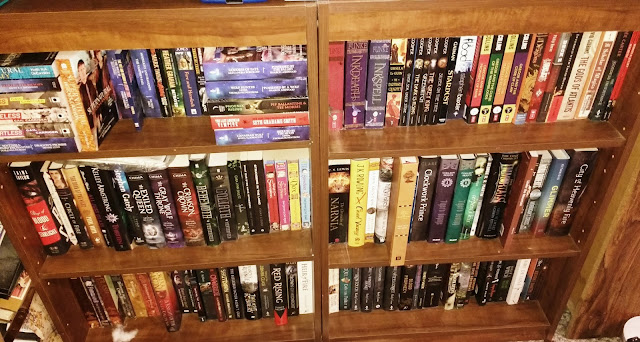 You're not seeing things, it takes up 2 and a half book shelves, in fact it's spilling off them and that doesn't even include the books I want to read that are up in the spare bedroom. The Archie collection there is not TBR, those have all been read, many, MANY times, that represents about 1/3rd of my collection of Archies not including what I've sent to Angie over the years. 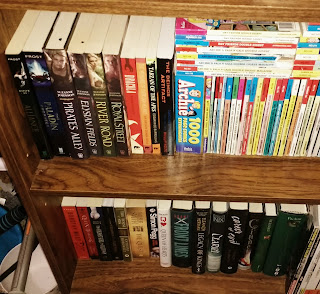 Obviously all of these are ones I really want to get to, because that is why I bothered to buy copies of them and have them sitting there, but let me pick 5 to showcase:

1. Front Lines by Michael Grant - an alternate history where young women were subject to the American draft in WWII
2. The Last American Vampire by Seth Grahame-Smith - did you know that Abraham Lincoln : Vampire Hunter had a sequel? Because I did not know that until I spotted this in a bookstore
3. Flood by Stephen Baxter - it's kind of like a modern day Noah's Ark which meets Day After Tomorrow from the sounds of it
4. Queen of Hearts by Colleen Oakes - this one's kind of a cop-out because I got to read an ACR of this book as an ebook in 2014 but it'd been published in hardcover now finally so I want to reread it - it's an Alice in Winderland re-telling from the Queen's POV - all about how she became the Queen of Hearts we all love to hate
5. An Evil Guest by Gene Wolfe - I bought this probably a good 5 or so years ago for $5 on the clearance shelves at a Chapters - I'm still not 100% sure what it's about but it's got a Lovecraft-vibe and the cover reminds me of some of my favourite Christopher Pike novels

Posted by Lauren Bourdages at 03:06